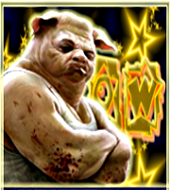 A few weeks ago, a good friend of mine from the  s1-Server* of TWG ( the wrestling game ) , who calls himself "Ravenous", had the same Problem like many FW-Players before him, during a running story and because of a season break of his Federation at TWG, he wasn´t able to continue with his stuff.

So he decided to produce a show by himself to finish his Story. At first the plan was, to build a little Show around one Match. After Ravenous had a long feud against his Twink-Character  Serena this Episode should be the Showdown of his Storyline, with the Battle between Ravenous and Serena as Main Event.

After all, with some help of his friends, he produced a whole Wrestling Show, including Backstage&Locker Room Skits, Interviews, Speeches, Commercial Breaks and a Bonus Match before it all ends in a stunning 27 Minutes Main Event Match.

Also Ravenous´ Style is far away from the typical  WWE-Mainstream Wrestling, and he uses a lot of Comic and Manga impressions in his  Dungeon-Wrestling World.

I really was impressed about his Show, such a big surprise, because like I said before, I thought he will release some kind of  Mini-Show and for me it´s a good example, that at least everything is about motivation.

Actually Ravenous starts a new project, you can find him here.